Charoen Muang is an area lesser known by visitors since most people stay around the Old City or Nimmanhaemin. This quartier starts at Narawat Bridge on the other side of the Ping River and is also the starting point of the same named road. Although Charoen Muang doesn’t boast lots of cultural and sightseeing points, it’s worth to spent a bit of time around this local neighbourhood, especially around the Ping River. Let’s have a closer look at what expects you there: 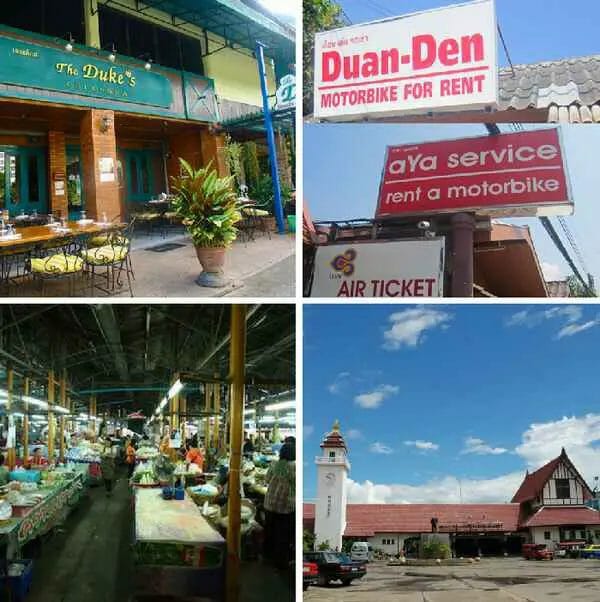 The CMCC attracts especially many foreigners as the services are held in English. Sunday service starts at 16:30 and lasts 1.5-2 hours. Many additional activities are held throughout the week.

Chiang Mai’s railway station is near the main post office, roughly two kilometres from the Old Town. It’s Chiang Mai’s only train station and the furthest in northern Thailand. Overall, the station is clean and well-maintained. The ticket counters can be found on the right side near the main entrance. There are several trains a day departing to Bangkok (12-14 hours) and of course, also to closer places like Lamphun. There is a big parking lot for motorbikes and cars around, taxis and Songthaews can be found at most times in front of the building. In addition, Chiang Mai Railway Station features several small eateries, an ATM and even a small spa (what a great idea!).

Just opposite of the train station is the main office of AYA. AYA is one of Chiang Mai’s leading transport providers with trips to various destinations around Thailand and neighbouring countries by mini-van. You can book trips to Pai (170 THB per way), Laos (Luang Prabang, Vientiane and Viang Vieng) border runs to Burma (basically crossing the border and back to get a new 15-30 days stamp) among various other cities and excursions. You can book your trip conveniently ahead by just calling the office. Pick-up from your hotel/hostel can be booked in addition for a small surcharge, otherwise just show up 15-20 minutes before the departure.

A visit to Chiang Mai, or generally to Thailand, wouldn’t be complete without visiting a cooking class. After all, food is one of the best things to discover a foreign culture. Air Thai Culinary Kitchen was established in 2004 and is one of Chiang Mai’s biggest cooking schools. Start the your culinary adventure with a trip to a local market and discover what ingredients are used to create mouthwatering dishes such as Green Curry with Chicken (Gaeng Khiew Waan Gai) or classic Pad Thai (fried vermicelli style noodles). Prices include hotel pick-up and drop, recipes and of course, the ingredients.

The Duke’s is THE place if you’re hungry and craving for large portions of burgers, pizzas, pasta and sandwiches. Its location at the Ping River is easy to spot and in walking distance from Nawarat Bridge. Highlights include ¼ Pound Chilli Cheese Burger, Tuna Filet Sandwich, Chicago Double Hot Dog and desserts like cheese cake, brownies and apple pie. Tipp: have a day of fasting before.

The Gymkhana Sport Club was established by the end of the 19th century by a group of expats who were aiming to boost athletic activities in northern Thailand. Fast forward and 120 years later, the club is still in existence and features among other things a nine hole par 36 golf course, a cricket field, two tennis courts and two squash courts. The colonial style club house as well the vintage interior reminds of the club’s early days. The Gymkhana Sports Club is considered to be Thailand’s oldest sports club.

Address: Rat Uthit Soi 6 – just after Nawarat Bridge turn right onto road 106 for about 2km and then left.