Although Chiang Mai doesn’t has a metro or skytrain like in Bangkok, it is easy and affordable to get around town. Over the past couple months, the public transportation system has been greatly improved with lots of further improvement and changes coming up in 2022.

Before we jump in and talk about the different methods of transportation in Chiang Mai, it’s worth to highlight that public transport almost solely runs during daytime. It’s usually more difficult to get anything after 22:00/23:00 and before 06:00/06:30 in the morning. 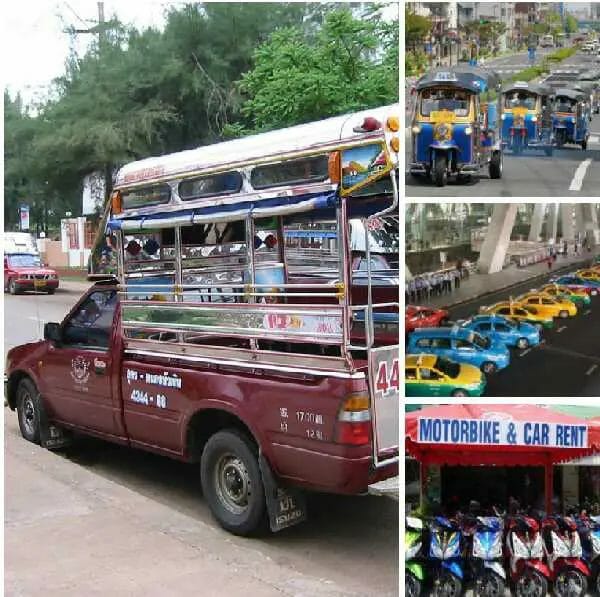 Songthaew literally means two benches and refers to what it actually offers: two sitting banks on the back of a pickup truck, of course, covered. Since Songthaews come in different colors, the red one is the most common one and the only one that functions as a taxi/bus mix: whenever you see one in the direction you’re headed, just stick your arm out.  Once the driver stops, tell him your destination; he will take you if he headed the same way, if not, just wait for the next one (don’t worry, it never takes long). Prices range between 20-40 THB within the moat and about 50-100 THB from the Old City to the train or bus station.

During the day, you can hire a songthaew to anyplace in the city for only 30 baht (after dark, you may need to negotiate), so long as you don’t mind sharing your trip with other passengers and being picked up and dropped off along the way. If you ask the driver, some songthaews can give taxi service (your own private trip), and you can sit next to the driver’s seat with the air conditioning on and travel to any area you like. Obviously, the fare is higher, but it is still less expensive than a taxi (usually 150 baht or less for a one-way ride in the city). Additionally, taxis might be difficult to obtain on the street, whereas songthaews are always available. GRAB, a widely-used ride-sharing mobile application that functions similarly to UBER, may also be utilised to request a private songthaew.

Pro tip: Don’t ask the driver for the rate. This shows immediately that you have no idea and the driver offers you a ridiculous high rate. Just go straight to the back and seat after telling the driver about your destination. If he proposes a rate, haggle!

Beside the red one, you can see also Songthaews in various other colors, whereas each color stands for a specific route. In other words, unless you’re staying at a dedicated bus stop, they won’t stop for you. Here are the colors and routes:

Tuk-tuks are the second most frequented method of transportation in Chiang Mai, after the songthaew. Tuk-tuks are more expensive than songthaews. Rates begin at 60 baht for small distances and range between 100 and 150 baht for larger distances. The only reason taking a tuk tuk should be just for the experience, not necessarily because you want to get from A to B. Drivers have a bad reputation for taking advantage of people, and they will often charge you much more than a Songthaew driver would for the same route. If your destination is far away and you are not in a rush, you should take a songthaew instead of a tuk-tuk because tuk-tuk drivers tend to charge more. Some drivers can be aggressive and may try to guide you towards commission-based attractions.

There are air-conditioned taxis in Chiang Mai, but they are scarce and difficult to hail. These taxis do not roam the streets; instead, they wait at the airport, train station, bus station, shopping malls, and hotels. Ask your hotel to call a taxi for you and ask the driver for his contact information. Get one or two more cab numbers in the event that he is unavailable. Taxis in the city are metered and cost between 100 and 200 baht per ride. The majority of travellers will take a taxi from the Chiang Mai airport to their accommodation.

If you’re hailing a taxi, make sure the driver turns on the meter. If he doesn’t, you either agree on a good rate (make sure you know the distance before) or just wait until the next red Songthaew comes. Unlike in Bangkok, you can just find a few taxis around since the main method are the aforementioned red minibuses.

The frequency of public bus service in Chiang Mai is limited. There are two airport shuttle bus lines that connect the airport to the city. The fare per passenger is 40 baht. There are also local white minibuses operating on two routes within the city. The cost is just 15 baht.

With the launch of the RTC Smart City Bus, the public bus has become the best means of transportation in Chiang Mai. The new and innovative RTC Smart City Bus debuted in the middle of 2018 and was added to the list. It is the most affordable public transit in Chiang Mai. It charges a flat rate of 30 Baht every ride, making it the cheapest and one of the most scenic modes of transportation.

Chiang Mai is a tropical city, the fact that these buses are roomy and have air conditioning is a nice bonus. Signs and pictures show where older people, pregnant women, people who are hurt or disabled, and parents with young children should sit. With the free Wi-Fi on their buses, passengers can also use their wireless devices to connect to the internet for free.

Bicycles may be rented in Chiang Mai for 50 baht per day (24 hours). It is relatively simple to find a bicycle shop or guesthouse that rents out bicycles. Coin-operated bicycle rental kiosks are also located throughout the city. Some hotels and inns provide complimentary bicycle use for their guests.

Riding a bicycle in Chiang Mai is an excellent method to see the ancient capital, particularly within the old city moat, as the historical sights, temples, cafes, hotels, stores, and restaurants are all placed within close proximity to one another. Bicycling provides you the freedom to stop for a sip of coffee, take a picture of a magnificent temple, do a U-turn wherever you like, etc. You may park your bicycle on the side of the road, in front of a restaurant or temple, beneath a tree, etc., as long as it does not hinder the sidewalk or the main route.

If you prefer a more peaceful road vacation with your family or party, try hiring a car. The most typical 5-seater vehicle costs between 800 and 1,000 baht per day (24 hours). Per day, an SUV, pickup vehicle, or van will cost between 2,500 and 3,000 baht. Most vehicles do not include a GPS system. The 3G/4G coverage in Chiang Mai is great, so you should have no trouble using a smartphone app such as WAZE or Google Map as your navigation system, even if you are planning a road trip to the summit of a mountain.

If you require a vehicle immediately upon arrival at Chiang Mai International Airport, National Car Rental and Avis Rent a Car are the two firms operating there. Please call the company in advance to ensure that a car is available for you. If you are not in a hurry, there are other vehicle rental agencies in the old city that provide reduced rates. Some companies require the original passport as collateral. However, you can alternatively pay a cash deposit of approximately 10,000 baht. Stick with the company that provides comprehensive insurance and 24-hour roadside help to avoid high repair bills in the event of an accident.

Keep in mind that Thais drive on the left side of the road. A valid Thai or international driver’s licence is necessary to operate a vehicle legally in Thailand. Some car rental companies will not rent to you if you do not possess a valid driver’s licence.

Using mobile ride-sharing apps, such as Uber and Grab, to move about Chiang Mai is perhaps the most convenient mode of public transportation. In fact, the rate is frequently less expensive than a traditional taxi service provided you use the most recent coupon code.

Grab is Southeast Asia’s popular alternative of Uber. If you’re going to be in Southeast Asia for a long time, you should put this app on your phone. It will help you a lot in Thailand, Vietnam, Malaysia, Singapore, Indonesia, the Philippines, and other places. In fact, Grab allows you to choose between a private automobile (GrabCar), a traditional taxi cab (GrabTaxi), or a Songthaew (Grab RodDaeng). If you book a taxi ride through GrabTaxi, a modest booking fee will be added to the usual metered taxi rate.

In Chiang Mai, renting a motorcycle is relatively inexpensive. For 99 baht per day (24 hours), you can rent a motorcycle with a 100cc engine and two helmets. A basic 110cc – 125cc motorcycle costs between 150 and 200 Thai Baht per day. Scooters/motorbikes are the ideal method of transport in Chiang Mai. You can get easily anywhere without being stucked in traffic jams or worrying about a parking place. In addition, they’re easy and inexpensive to maintain. Renting a scooter like a Honda Scoopy or Honda Click costs between 100-200 THB per day. Manual motorbikes usually cost more, depending on the engine size. Expect to pay higher rates when renting from a motorbike shop near main tourist areas such as Thapae Gate or Nimmanhaemin Road. As with the cars, inspect your bike properly before paying.