If there is one dish synonymous to Chiang Mai and northern Thailand, then it’s undoubtedly Khao Soi. It is difficult to find the best khao soi in Chiang Mai because the flavour of this dish is so exceptional. Due to its origins in Myanmar, Laos, and the northern regions of Thailand, each region has its unique variant of this incredibly popular curry. Even if you travel to cities adjacent to Chiang Mai, like as Chiang Rai, you will taste an entirely different type of khao soi.

What is Khao Soi?

Khao Soi is a slightly spicy curry dish that is served with either tender chicken or beef. What makes Khao Soi so unique is its firework of flavours: imagine a yellow curry broth blended with coconut milk, chilli, a dash of sugar and soy sauce. First, the bowl is filled with yellow egg noodles, followed by the above-mentioned curry broth, then, chunks of soft beef or chicken (often a drumstick), topped with crispy noodles. Khao Soi is mostly accompanied with a small plate of pickles, diced onions and chilli. Often considered as a Burmese dish, Khao Soi was actually introduced by settlers from southern China. 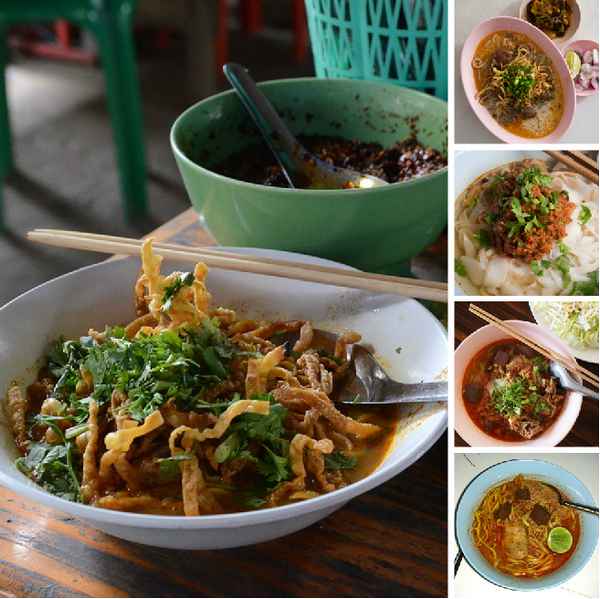 The dish is commonly eaten with chopsticks and a Chinese soup spoon. Portions are everywhere relatively small, it’s not rare to eat another bowl (maybe you can sample both, beef and chicken) or, as tip, order a bowl of rice along. Adding vegetables is another option, for example Fried Morning Glory or Som Tam. Round up your Khao Soi dining experience with a chilled Singha or Coke. Prices for a bowl of Khao Soi range somewhere between 40-60 THB.

There are many places in Chiang Mai to choose from – here’s our list of the best places to eat Khao Soi in Chiang Mai:

Aroon Rai is a fix establishment in Chiang Mai’s diverse culinary scene, offering Khao Soi since 1957. Yes, since 1957. The restaurant is convenient located near Thapae Gate and specializes only in northern Thai cuisine, while their Khao Soi is arguably considered as the best in Chiang Mai. Locals and foreigners alike are dining here, the lively atmosphere and friendly staff makes one to return back even more often. By the way, Aroon Rai sells even their Khao Soi broth as powder, for you easily to try at home.

This mom’n’pop-style restaurant, which translates to ‘Grandma’s Khao Soi’, can be easily missed as it looks more like a small private Thai house with no English signs around. The Khao Soi here is extremely popular as its broth is very intense as oppose many others that can be often quite watery. Locals love Khao Soi Khun-Jay for its incredibly creamy and delightfully tasting Khao Soi. This modest neighbourhood restaurant has an open kitchen in the rear where you can watch and smell the big pots of their renowned curry being prepared. People frequently enter the restaurant between 10:00 and 14:00 to savour the unique khao soi. The few seats are totally taken up around midday during peak hours, however because to the speedy service, there is little wait time. Remember that the curries do occasionally sell out. Come before noon as it gets quickly busy here.

Among locals mostly considered as one of the closest versions to its original when first introduced in Thailand. Lam Duan also offers a very rare Khao Soi version with pork. The restaurant is operating for more than 30 years, however, don’t expect any super comfy setting here; as with most other Khao Soi eateries, this is one is simple too in terms of sitting facilities. Nevertheless, the taste is amazing and the place is well worth a visit.

What is so unique about the khao soi at Khao Soi Maesai?
The Khao Soi here is widely known for its intense flavour and rich texture. The restaurant enjoys quite some popularity and gets quickly full during lunch. It boasts the richest, most savoury flavours we’ve ever encountered, and the curry is delightfully creamy with just the right amount of heat. Beef, pork, chicken legs, and vegetarian choices are the available four selections. If you want the greatest vegetarian Khao Soi in Chiang Mai, go to the restaurant that delivers the best khao soi in Chiang Mai!

This restaurant serves four other popular local noodle meals in addition to Khao Soi, though the Khao Soi is the major draw. Prices range between 30 and 50 THB. Monday through Saturday, the restaurant is open from 08:00 to 16:00. Because Khao Soi is frequently eaten during lunch, it is always crowded at that time. The eatery only has sixteen seats. Despite the speedy service, we recommend visiting Khao Soi Maesai after 14:00. To place your order, you have to take a seat and write down your desired dish (and drink) on a piece of paper and hand it to the waiter. Try also the delicious Thai Ice Tea here.

This eatery is located near the famous Night Bazaar along a stretch that is known for several Muslim restaurant and groceries. Their Khao Soi is especially praised because of its authenticity to its original, which was introduced by Yunnanese Muslims. As some Khao Soi might taste similar, this one here is quite unique. Khao Soi Islam is generally a great spot to sample Muslim Thai food. 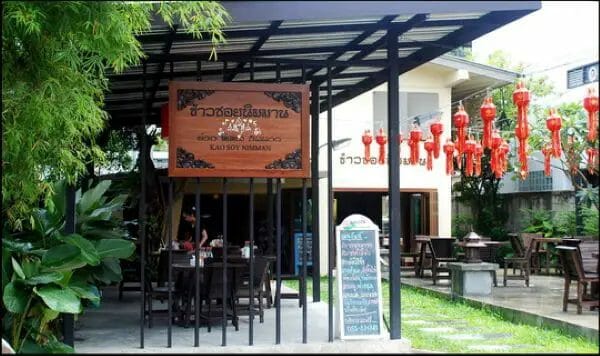 Kao Soi Nimman includes seating outside, but you may also opt to sit inside where it’s cool. Kao Soi Nimman serves a wide selection of Northern Thai specialties and is well recognised for these mouthwatering dishes, despite the fact that you might assume from the restaurant’s name that it’s all about the khao soi. The curry itself is the same, despite there being twelve distinct khao soi options.

The sort of protein you prefer makes a difference. Customers can select from stewed beef to Thai omelette, all of which are priced between 79 and 99 THB. The Super Bowl of Khao Soy costs 169 THB and includes Northern Thai sausage, squid, prawns, pork, and chicken drumsticks. Our favourite was the wonderfully balanced Kao Soi Kai (79 THB), which includes a chicken drumstick. The most popular khao soi dish is typically a chicken drumstick because it is the one that is most tender overall. From 11:00 till 20:00 every day, Kao Soi Nimman is open.