[Songkran](http://en.wikipedia.org/wiki/Songkran) is the festival that marks the beginning of the New Year in the traditional Thai calendar. It used to be held on the full moon of the eleventh month, which coincided with the beginning of the northern spring, when the sun started moving northwards. These days the date is fixed, and each year the festival is held over three days from April 13-15 (though it may begin earlier and end later, depending on the year and the region). Festivals similar to Songkran are held at about the same time in Laos, Cambodia, Myanmar, and in the Yunnan region of South-West China. The name Songkran (สงกรานต์) comes from the Sanskrit ‘sankranta’, meaning a move or change. 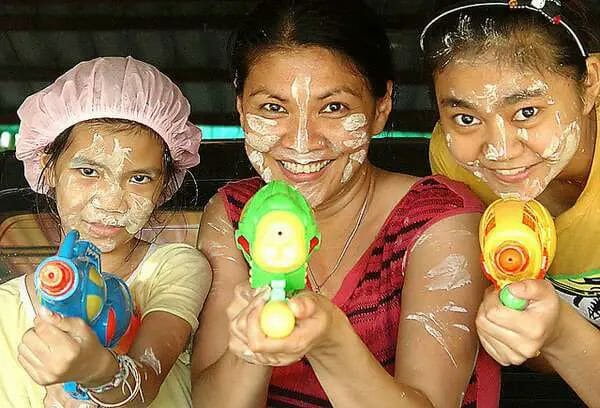 Songkran used to be observed only in Northern Thailand, leading some to believe that it was originally brought to Thailand by the Burmese. It is now celebrated all over Thailand, although the celebration in the northern city of [Chiang Mai](http://www.thaiwaysmagazine.com/thai_article/2324_songkran_chiang_mai/songkran_chiang_mai.html) is generally recognized as the most authentic example, and also the most intense.

The official dates for the Songkran festival in Chiang Mai are **Friday, 13 April 2018 to Sunday, 15 April 2018**. The fact that Songkran is falling on a weekend this year means that __Monday 16 April, 2018__ will also be a bank/government holiday. This is the most important festival of the year for Thai people, and they know how to make the most of it. All government offices will be closed for the duration of the holiday, and many businesses will give this time off to their employees.

Traditionally, Songkran was a time when Buddha images from private homes and temples were cleansed with specially perfumed lustral water. In many cities, Buddha images are taken from the temples and paraded around the streets for this purpose. Also at this time sand is taken to the temples, sculpted into shapes like stupas (chedis), and decorated with colorful flags. At this time, many people take the opportunity to carefully clean their houses and to make New Year resolutions, promising to do good deeds and refrain from doing bad ones. 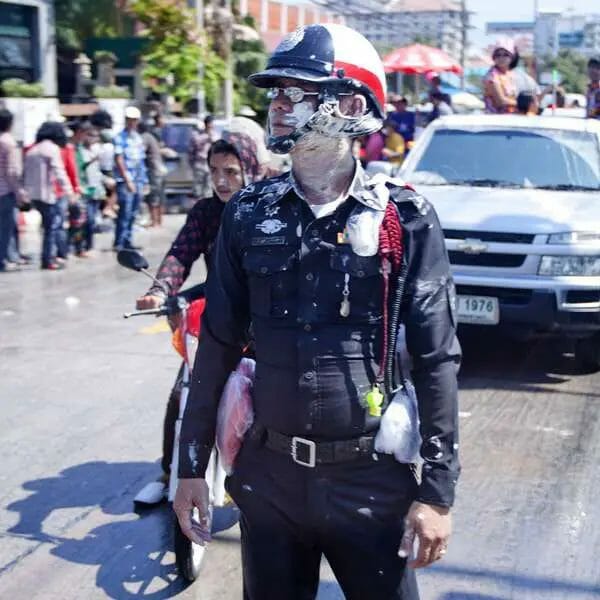 A feature of the celebration was that some of the lustral water used to bathe the Buddha images was collected. It was then gently poured onto elders and family members as a sign of respect and to ensure good luck and prosperity in the coming year. What has happened in modern times is that this aspect of the celebration has become its central theme, and has become much more intense. The result is that Songkran now resembles a three day water-fight in which any weapon, from high pressure squirt guns to buckets filled with icy water, is considered fair game.

It has become very popular with younger Thai people, and the younger tourists from overseas, who see it as three days of fun, rather than a religious festival. In fact, most Thai people are happy to take part in this fun aspect of Songkran, particularly as April is usually the hottest month of the year, when temperatures can top 100º F (40ºC). Every year there are calls from political and religious leaders to moderate the festival, particularly in light of the horrendous carnage on the roads, but every year these calls are ignored.

Chiang Mai offers plenty of opportunity to enjoy both the traditional and the modern aspects of Songkran. On the first day of Songkran (Wan Maha Songkran) a procession of Buddha images placed on specially decorated floats, accompanied by marching bands from local schools and detachments of various civic groups, makes its way from the railway station to Wat Phra Singh in the center of the old town. All along the route citizen throw lustral water onto the images to ritually cleanse them, and so gain merit.

Leading the way is the famous Phra Sihing image, which is then placed in front of the temple at Wat Phra Singh so that people can continue to cleanse the image for the rest of the festival. This procession is nearer the true spirit of Songkran and, while there is plenty of gentle water-splashing, it is free of the ebullient hooliganism on display elsewhere in the town.

The sand sculptures can be seen at temples all over Chiang Mai. The sand is usually carried into the temples on the afternoon of the second day (Wan Nao), and then sculpted and decorated on the morning of the third day (Wan Thaloeng Sok). Also on the third day, devout Buddhists will bring offerings to the temple, often dressed in traditional clothes. Ceremonies will take place at the viharn, or central meeting hall, of the temple. Flags will be placed on the sand sculptures and symbolic supporting sticks placed under the large Bodhi tree that is usually found in the temple precincts. Back at home many devotees will offer lustral water to elders and senior family members. 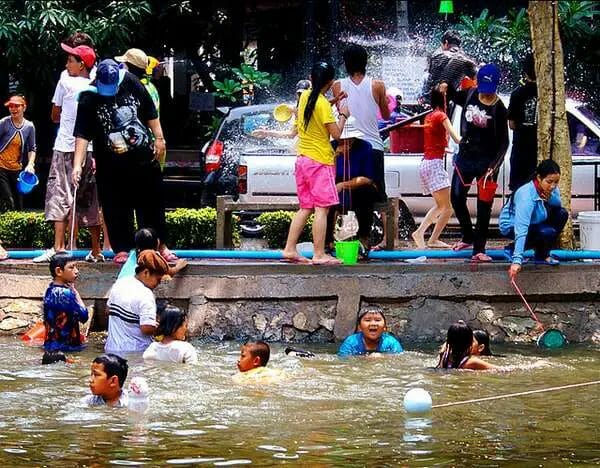 As for the modern Songkran, the [water madness](http://blog.travelandleisureasia.com/photo-blog/2010/02/01/thai-new-year-songkran-in-chiang-mai/) is evident everywhere, but is particularly intense around the moat. The city authorities make a brave attempt to clean up the moat at this time. It is drained, cleared of obstacles and then refilled and aerated, in the expectation that many young tourists and locals will be swimming in the moat, having dived in, or fallen, or been pushed.

Even so, those joining them are advised not to ingest any of the water. Young people will drive around in tuk-tuks with the hoods down, equipped with water guns and buckets of icy water. Fire will be exchanged with pedestrians, motorcyclists, other young people riding shotgun in the back of pick up trucks, and just about anyone else who gets in the way. Those wishing to take part will find plenty of vendors willing to supply them with guns, water, ice and cans of beer. Those people riding motorcycles will need to take special care. In recent times the actual beginning and ending of the water splashing period has become more elastic, so expect to be suddenly soaked in icy water in the days just before and just after the official Songkran festival period.

It may seem like unrestricted mayhem, but there is etiquette to be observed. Monks and pregnant women are not considered valid targets. You do not splash or shoot water inside restaurants, hotels or people’s homes. Most importantly, once the sun goes down, people go home to change into dry clothes and a general cease-fire then comes into effect. Tourists who do not understand these rules can find themselves in trouble both with offended victims and with the police. Observe what the Thais do, and you will not go far wrong.

Looking for other places to celebrate the festival? 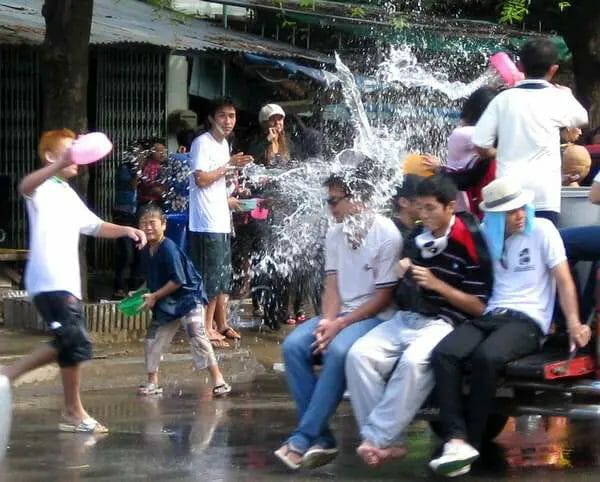 Neighboring South East Asian countries have similar festivals at about the same time. In Myanmar the festival is known as [Thingyan](http://en.wikipedia.org/wiki/Thingyan). The date of this festival is still calculated using the traditional lunisolar calendar, and thus has no fixed date, but is normally held some time in April. In Myanmar this holiday is associated with a Hindu myth in which the King of the Brahmas had his head cut off by the King of the Devas. An elephant’s head was joined to the body of the King of the Brahmas, so creating the god Ganesh. The head however had such dangerous magic that it had to be carefully carried around by a princess devi for a year.

Thingyan represents the time when the head is passed on for safekeeping to another princess devi for the following year. Water-splashing is as much a feature of this festival as the Thai Songkran, but much stress is also laid on pageants, beauty contests, music, comedy shows and dance performances. On the third day of the festival devout Buddhists in Myanmar will wash the hair of elders and senior family members. Also on this day fish, rescued from drying lakes and streams, are released into larger lakes and rivers along with the prayers and good wishes of the rescuers.

Laos has a similar culture to that of Northern Thailand, and the [Lao New Year](http://en.wikipedia.org/wiki/Lao_New_Year) shares many of the features of Songkran. The festival takes place at the same time, so those tourists who think they can escape a soaking by going to [Laos](http://www.thingsasian.com/stories-photos/1731) at this time of year are in for a disappointment. In addition to water, revelers in Laos may also throw white powder or shaving cream. 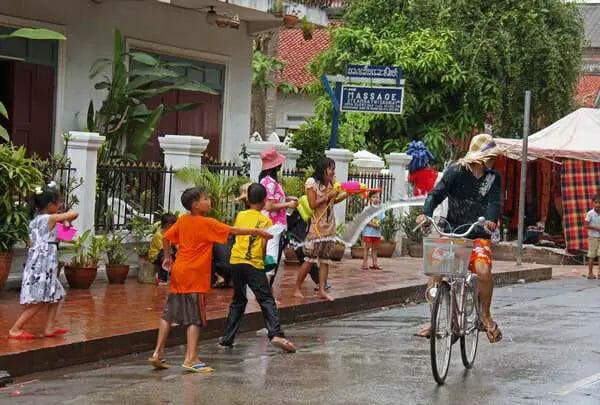 The [Cambodian New Year](http://en.wikipedia.org/wiki/Cambodian_New_Year), also known as Chaul Chnam Thmey, lasts for three days, usually beginning on April 13 or 14. The Cambodians are mostly Theravada Buddhists like the people of Laos, Burma, and Thailand and the festival shares some of the features of New Year festivals in those countries, for example building sand stupas, bathing Buddha images in lustral water, offering lustral water to elders, and bringing offerings to the temple. It does not, however, feature the water-splashing and water-fights found in neighboring countries. New Year in Cambodia should not be confused with the Water Festival called Bon Om Thook that takes place in November every year on the Tonle Sap lakeshore, which focuses instead on traditional boat racing.

The Dai minority of the [Xishuangbanna Autonomous Prefecture](http://www.forest-cafe.org/xishuangbanna/Water-Splashing-Festival-in-Xishuangbanna.htm) in the Yunnan Province of south-western China also hold similar festivities at this time of year. This is a Thai speaking minority group with a culture very like that of Thailand or Laos. Xishuangbanna is in fact a Chinese rendition of Sipsongpanna, a Thai name meaning _twelve thousand rice fields_. 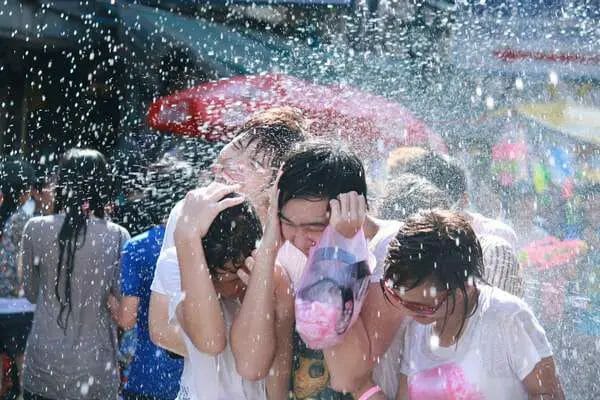