The [Royal Ploughing Ceremony](http://en.wikipedia.org/wiki/Royal_Ploughing_Ceremony) is an ancient rite observed in Thailand and Cambodia to mark the traditional beginning of the rice-growing ceremony. It takes place during the sixth Thai lunar month, but the actual date of the ceremony is not fixed exactly. It has to be announced by the astrologers at the Bureau of the Royal Household. Once it has been announced, the Cabinet will approve a public holiday for that date. This public holiday is also sometimes referred to as Thai Farmer’s Day.

* __Thursday, 11 May 2017__ is the date for the Royal Ploughing Ceremony in 2017. Full coverage of the ceremony held in Bangkok will be on Channel 3, and likely other TV Channels beginning at around 8:30am. 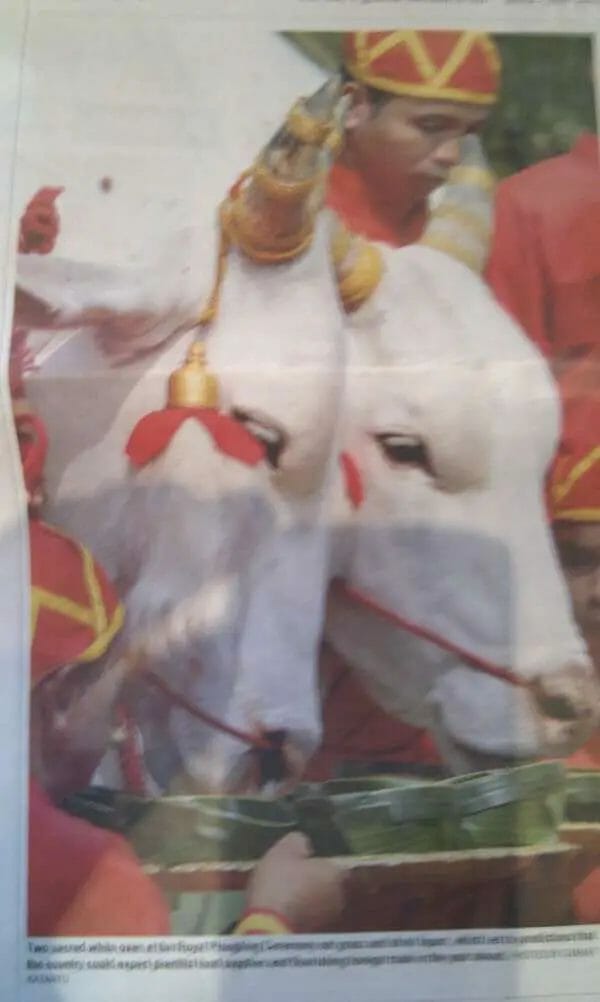 The ceremony has Brahminic origins, dating back to a period before Buddhism, but under King Rama IV a Buddhist component to the ceremony was added. By the 1920s the ceremony had been discontinued, but it was revived by the present King Bhumipol Adulyadej in 1960. The ceremony takes place in Bangkok, at the Sanam Luang, the field in front of the Grand palace and the Temple of the Emerald Buddha. In Thai, the ceremony is known as _Kan Phuet Cha Mongkon_ (การพืชมงคล). It is presided over by either the King or, more recently, Crown Prince Maha Vajiralongkorn. There is also present a Brahmin master of ceremonies known as the Lord of the Festival.

At the beginning of the [ploughing ceremony](http://www.asiarice.org/sections/riceheritage/thailand.html) the Lord of the Festival is asked to select one of three pieces of cloth from a covered tray. Depending on the length of the cloth chosen, a prediction is then made regarding the rainfall that can be expected that year. After this, two sacred oxen are yoked to a wooden plough and three concentric and three parallel furrows are ploughed. Into these are scattered rice seeds grown in fields at the royal palace. The rice seeds are carried by four women in golden baskets.

After their work, the oxen are given some welcome refreshment. They can choose from, among other things, rice seeds, sesame, hay, green beans, water and rice-whiskey. What they choose to eat or drink is used as the basis for predictions for the coming year. For example, if they choose the rice-whiskey this is said to be a good omen for the communications, finance and the economy. After the ceremony members of the public rush in to collect the rice seeds. These are thought to have great auspicious properties, particularly by Thai farmers, who mix them in with their own seeds. Some of the seeds are also distributed to farmers in other provinces of Thailand. The colorful ploughing ceremony is open to the public and is always broadcast live on Thai television.