## The Meaning of Wisaka Bucha

It celebrates the birth, enlightenment and passing away of the Buddha. According to the Theravada Buddhist traditions observed in South East Asian countries, these three events all took place on the same day of the year, the full moon day of the Indian lunar month of Wisaka. Thus, the Buddha’s enlightenment took place on his thirty-fifth birthday and he passed away on his eightieth birthday. Wisaka, the sixth lunar month, usually falls in May. In most of these countries, including Thailand, it is an official public holiday. 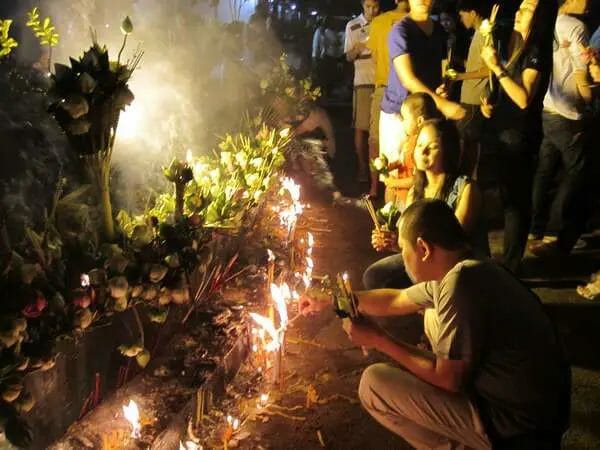 (Note that holiday this is sometimes spelled Vesakha, Vesaka, or Vesak. In Thai, there is no *V* consonant or sound, and the name is spelled with *ว* which is a *W* sound.)

For devout Buddhists, this is a day for visiting the temple, to bring flowers and offerings, and to meditate and listen to sermons. In the evenings there is often a candlelit procession, and the devotees will walk around the main shrine of the temple three times, celebrating the triple jewel of Buddhism – the Buddha, his teaching (Dhamma), and the monkhood (Sangha). Many places also have a tradition where a statue of the baby Buddha, kept at the temple, is blessed by bathing it with water.

At this time many devout Buddhists will observe not merely the [five precepts](http://en.wikipedia.org/wiki/Eight_precepts) that all lay people are supposed to observe on a daily basis, but an additional three precepts, namely: not eating anything after mid-day, not wearing bright clothes, jewelry, or perfume, and not using a soft chair or bed. At this time such Buddhists usually wear white clothing. There are also more secular entertainments associated with this festival, including parties and parades. Nevertheless, the main focus is on religious observance, with particular emphasis given to mediation on the [teachings of the Buddha](http://www.buddhanet.net/vesak.htm). In line with this, visitors may find that pubs and bars are closed on this day, and that restaurants may not serve alcohol. 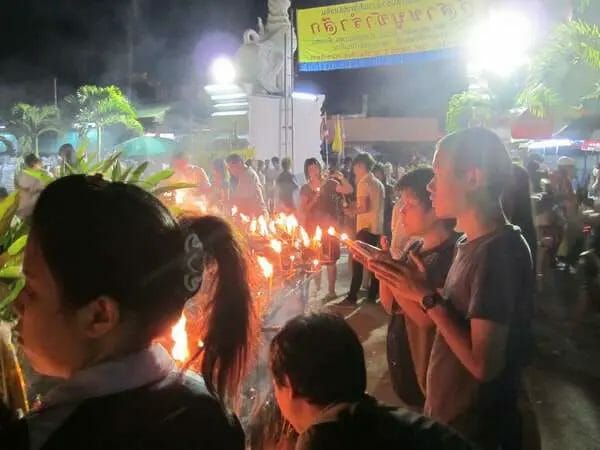 In Chiang Mai, there is a particularly colorful and moving expression of this religious devotion. In the late afternoon of the day before Wisaka Bucha (around 5 or 6pm or later, people gather at the bottom of Doi Suthep mountain, near the statue of Kru Ba Srivijaya, and at sunset begin a [procession up to mountain to Wat Doi Suthep](http://www.chiangmai-chiangrai.com/visakha_bucha_day.html), the temple at the top of the mountain. The devoted will walk the nine kilometers up the steep hill, carrying lanterns made of paper and lit by candles. Some time later in the evening, which could be as late as midnight, depending on the speed of their ascent (and when they begin), the devotees arrive and perform the _wian tian_, walking around the main shrine holding a candle, three incense sticks and a lotus bud. After this, they wait for the dawn, at which time they make their offerings to the monks in the temple.

Anyone who wishes can join this procession is welcome. This is a religious pilgrimage and so appropriate clothing and behavior is expected. Drinking alcohol along the route is strictly forbidden and highly offensive.

## Announcement of events for Wisaka Bucha 2014