[Wisaka Bucha](https://chiangmaibest.com/wisaka-bucha-visakha-vesak/) is on Monday, June 4th, 2012. This is a national holiday and banks and government offices are closed. Temple schools may hold half-day celebrations and have the children march in a parade to various Buddhist temples and shrines in the nearby neighborhood. Most other schools will be closed for the day. This holiday celebrates the anniversary of Buddha attaining enlightenment 2,600 years ago. Note that holiday this is sometimes spelled Vesakha, Vesaka, or Vesak. In Thai, there is no “V” consonant or sound, and the name is spelled with ว which is a “w” sound. 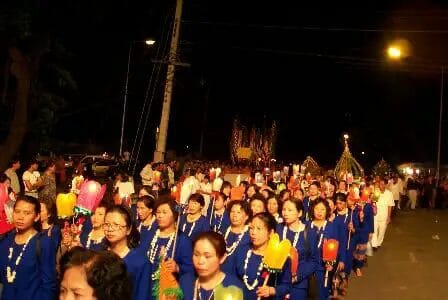 ## Beginning of Wisaka Bucha ##
For many, this holiday begins early, starting on Friday, June 1st, when they begin taking on more precepts, and attuning their minds to the Buddhist path and message.

## Events on Wisaka Bucha ##
For devout Buddhists, this is a day for visiting the temple, to bring flowers and offerings, and to meditate and listen to sermons. In the evenings there is often a candlelit procession, and the devotees will walk around the main shrine of the temple three times, celebrating the triple jewel of Buddhism – the Buddha, his teaching (Dhamma), and the monkhood (Sangha). Many places also have a tradition where a statue of the baby Buddha, kept at the temple, is blessed by bathing it with water. At this time many devout Buddhists will observe not merely the five precepts that all lay people are supposed to observe on a daily basis, but an additional three precepts, namely: not eating anything after mid-day, not wearing bright clothes, jewelry, or perfume, and not using a soft chair or bed. At this time such Buddhists usually wear white clothing. There are also more secular entertainments associated with this festival, including parties and parades. Nevertheless, the main focus is on religious observance, with particular emphasis given to mediation on the [teachings of the Buddha](http://www.buddhanet.net/vesak.htm). In line with this, visitors may find that pubs and bars are closed on this day, and that restaurants may not serve alcohol.

## The Meaning of Wisaka Bucha ##
[Wisaka Bucha](en.wikipedia.org/wiki/Vesākha) (วันวิสาขบูชา), pronounced _Wisakha Bucha_ in Thai, is the most important religious holiday in the Buddhist calendar. It celebrates the birth, enlightenment and passing away of the Buddha. According to the Theravada Buddhist traditions observed in South East Asian countries, these three events all took place on the same day of the year, the full moon day of the Indian lunar month of Wisaka. Thus, the Buddha’s enlightenment took place on his thirty-fifth birthday and he passed away on his eightieth birthday. Wisaka, the sixth lunar month, usually falls in May, and in 2011 it will be celebrated in Thailand on Tuesday, May 17. In 2012 it takes place on Monday, June 4. In most Buddhist countries, including Thailand, it is an official public holiday. Note that in some countries the month counted as Wesaka can vary. For example sometimes the Cambodian calendar is different from the Thai calendar by a lunar month.

## Doi Suthep Procession in Chiang Mai – June 3rd ##
There will be various ceremonies every evening from May 29 to June 3, 2012 at Wat Chotikul Suwannaram (Wat Mou Boon) near the Kruba Srivichai Monument in Chiang Mai.

Doen Khuen Doi Suthep (Walk Up Doi Suthep Tradition) is a pilgrimage up the local mountain to the west of Chiang Mai. This walk up Doi Suthep takes place the night before Visakha Bucha Day, which is the evening of Sunday, 03 June 2012.

Sunday night, June 3 there will be a Lanna style parade to bring the holy water up to Wat Phra That Doi Suthep and the procession of the faithful begin their 11 km walk up Doi Suthep. Most people will arrive around 1-3 a.m. to walk three times around the temple. Then at 6:30 a.m. people will give alms to 225 monks at Wat Phra That Doi Suthep. There will be a bathing ceremony with Royal lustral water of the Buddha images at 3 p.m.

This ceremony, a long standing Lanna tradition held the evening before Visakha Bucha Day, is widely attended from Buddhists and tourists from across the region.

It is believed that anyone who participates in the walk up to Wat Phrathart Doi Suthep, and does the _vien tiane_, or walking around the Grand Stupa for three rounds on Visakha Bucha Day, will receive the results of making merit: virtue, luck, and prosperity.