With such a long and significant history, it’s no wonder that Chiang Mai features plenty of museums. But not all are about the history of the city and the Kingdom of Lanna. Chiang Mai offers a great mix of informative, exciting and bizarre museums for everyone! Let’s have a look at what type of museums you can expect here: 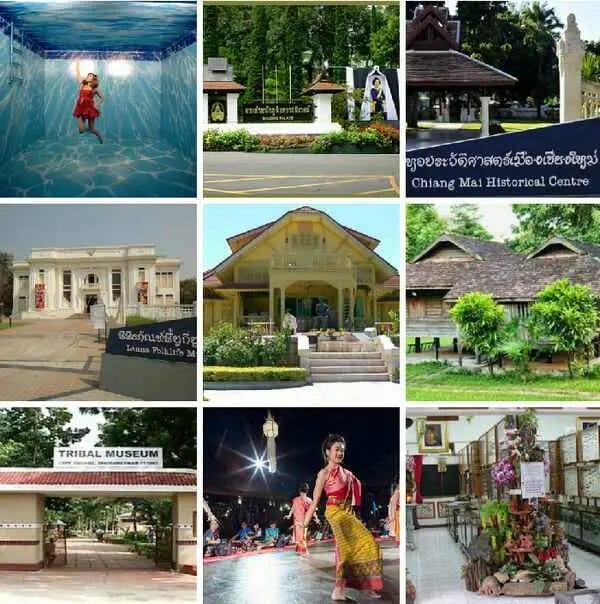 Art in Paradise Chiang Mai is probably one of the world’s coolest museums! Why? Because it’s interactive, needs involvement of the viewers and is a guaranteed fun experience for young and old. The museum features more than 130 amazing 3D paintings spread over two stories, whereas some are small canvas while others are two-storey, floor-to-ceiling artworks. Imagine running away from King Kong, holding the tail of a giant crocodile or surfing huge waves – you can do it (or better said, pretend to) all here. It takes about 2-2.5 hours to experience Art in Paradise properly, so take enough time with you. Come before 12:00 as it gets quickly full after.

If your time in Chiang Mai is limited but you’re keen on learning more about the history and culture of the city, then plan a visit to Chiang Mai Cultural Centre. The centre is located at the end of Wualai Road, the former silversmith quarter which is now famous for its Saturday Night Walking Street and offers various cultural performances like traditional dances and music, Muay Thai and a market where you can buy authentic souvenirs. The CMCC also offers the option of a typical Khantoke Dinner where you have the chance to sample from several northern Thai dishes. Granted, it’s not directly a museum, but a great way to learn about Lanna culture, especially if you’re short on time.

Bhuping Palace is one of several estates in Thailand that are owned by the Thai Royal Family. The palace currently serves as winter residence of the family and is located in Doi Buak Ha, which is very close to the famous Wat Doi Suthep. The palace consists of various buildings as well numerous beautiful gardens. A great place to catch a glimpse of the royal life!

The Chiang Mai National Museum primarily focuses on the rich history of Chiang Mai and the ancient Kingdom of Lanna with plenty of interesting history facts about the kings, culture, the people and life, in addition to lots of rare exhibits of money, pottery, Buddha images and many other fascinating artefacts.

The Tribal Museum, which was formerly part of Chiang Mai University’s Tribal Research Institute, is a great place when it comes to learning more about northern Thailand’s ethnic minorities, especially if you’re planning to visit some of the remote villages in Chiang Mai’s surrounding and places further north, towards the Burmese border. The museum highlights the life and history of various mountain tribes such as Karen, Akha, Hmong, Lahu, Lisu and various others by showcasing several indoor and outdoor exhibits like traditional clothes, jewellery, crafts, resembled houses and much more.

This bizarre museum is literally home to about 5000 species of insects. The owner is among the leading personalities in entomology and has discovered so far more than two dozen new species (two named after her). She is also the author and publisher of several articles and papers, many of which you can read on the first floor.

Located next to the airport, this restricted area is home to numerous planes from WWII as well some recent models from the Thai Royal Air Force. Here’s the catch: Wing 41 opens only upon request. Ask your hotel concierge to call and set an appointment. The museum opens only ”officially” for public on Children’s Day, which happen to be every second Saturday in January.

Location: near the airport Open: only upon request Entry: negotiable

The museum is dedicated to the life of former princess Phra Ratchachaya Chao Dararasmi (1873-1933) who contributed significantly to preserve Lanna culture and history. She supported many projects on health, education and agriculture in Chiang Mai and became quickly popular among the city’s residents. The museum offers now a rich insight of her life with many exhibits of crafts, furnishings, household goods, textiles, instruments, pictures and much more.

Built by Chiang Mai University in traditional Thai-colonial style, this great museum showcases traditional Lanna-style architecture and history across a dozen buildings, whereas each comes along with a detailed description about its function and role in the past.

The Chiang Mai Historical Centre is yet another interesting place where you can learn about Chiang Mai’s captivating history: it showcases many ancient artefacts, as well several dioramas that depict scenes of the then day-to-day life of families, workers, etc. The descriptions are in Thai and English (well translated).

Location: behind Three-Kings-Monument Open: Tuesday to Sunday, 08:30-17:00 Entry: get the 3-in-1 pass for the Historical Centre, Folklife Museum and Arts and Culture Centre for 180 THB.

Set in a marvellous colonial style building, which once served as the provincial court, this museum exhibits as well numerous dioramas, however, only a small selection of artefacts. The Lanna Folklife Museum is also known as the Lanna Heritage Centre.

The Chiang Mai Arts and Culture Museum exhibits, similar to the two above mentioned museums, a series of dioramas and artefacts, whereas this museum focuses on life and nature.