The [Mid-Autumn Festival](http://en.wikipedia.org/wiki/Mid-Autumn_Festival) – [เทศกาลไหว้พระจันทร์](http://th.wikipedia.org/wiki/เทศกาลไหว้พระจันทร์) – also known as the Moon Festival – takes place at the full moon of the eighth month in the [Chinese Lunar Calendar](http://en.wikipedia.org/wiki/Chinese_calendar). This is the closest full moon to the autumnal equinox when the moon is said to be at its fullest and roundest – the so-called _harvest moon_. In traditional Chinese agrarian societies it marks the end of the harvest period when family and friends gather to celebrate a time of plenty.

This festival is held everywhere there is a large Chinese community, and Thailand is no exception. In Bangkok the focus of the celebrations will be along the Yaworat Road. In Phuket it will be in the old part of Phuket Town. In [Chiang Mai](https://chiangmaibest.com/) the place to go will be [Pung Tao Gong Chinese Ancestral Temple](http://a.northernthailand.com/chiangmai-attractions/historic-sites/wats-temples/251-pung-tao-gong.html?lang=th) next to Warorot Market (Kad Luang). This colorful temple is very photogenic and is well worth a visit at any time. 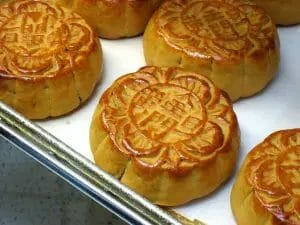 The Mid Autumn Moon Festival is a time for giving thanks for the Earth’s bounty and to remember the ancestors. Expect the Chinese temples to be crowded at this time. Special offerings of incense, red candles, fruit and duck will be made at this time. The devotees will often wear red – the luckiest most auspicious color for Chinese people. Since this is a time when Chinese people can celebrate their unique cultural heritage, there will be cultural displays, dances and musical performances.

Gifts are exchanged at this time of year, particularly gifts of fruit (especially the pomelo), and the famous [moon cakes](http://en.wikipedia.org/wiki/Mooncake). Moon cakes are round sweet cakes filled with sesame seeds, ground lotus seeds and egg. Around the time of the Mid Autumn Moon Festival these cakes can be bought almost anywhere (including 7-11s throughout Thailand).

There is a legend associated with the moon cake. During the rule of the Mongols the native Han Chinese rebels used moon cakes to communicate secretly with one another. Moon cakes are sold in packages of four. Each moon cake would be cut into four pieces and the sixteen segments re-arranged so that the marks on the crust would spell out a coded message. The cakes would then be hurriedly eaten to conceal the evidence. The story is that Han Chinese used this method to co-ordinate their successful revolt against the Mongols at the time of the harvest moon in 1368, so bringing the [Ming Dynasty](http://en.wikipedia.org/wiki/Ming_dynasty) to power.

Enjoy the Mid Autumn Moon Festival, and take your time over the moon cakes. 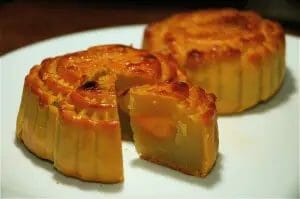