## The King’s Birthday, Father’s Day, National Day ##
King Bhumipol Adulyadej was born on December 5, and this day is now celebrated as Father’s Day across Thailand. Thai people may give a _dok Buddha ruksa_ (also known as a canna flower) to their fathers and grandfathers on this day. Many people also wear yellow, which is the king’s color. This day is also celebrated as National Day. The reverence in which the people of Thailand hold their king cannot be overestimated. 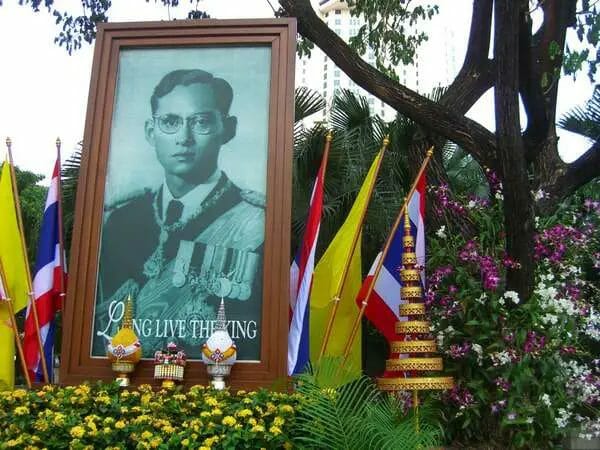 * Many Thai people will travel to Hua Hin to celebrate the King’s birthday. Countless more will gather throughout the country to feed monks in the morning.
* Note that the Emerald Buddha Temple will be open on December 5-6th, but the Royal Palace will be closed both days, and the Royal Chapel will be closed on the 5th but open on the 6th. See [Bureau of the Royal Household](http://www.brh.thaigov.net/) for more information (Thai language site).

## The King of Thailand

In many Western countries the concept of constitutional monarchy is well understood. The monarch is seen as a symbol of the nation and its continuity, and for this reason he or she is expected to be above politics and so a representative of all the people in the state. In Western countries it is understood that this non-political stance does not necessarily make the monarch immune from criticism or even satire. Thailand is a constitutional monarchy as well, but the concept of kingship in Thailand is much stronger and more far-reaching.

As with some other aspects of Thai culture and that of Southeast Asia, the concept of [Thai kingship](http://en.wikipedia.org/wiki/Monarchy_of_Thailand) has drawn on ancient Brahmin ideas, modified by later Buddhist ones. The Hindu or Vedic idea of a king is of a warrior leader whose absolute power comes from military might, and who is accorded the status of a semi-deity, a status protected by strict traditions. Kings were traditionally approached by their subjects crawling on the ground before them, persons outside the royal family were not allowed to touch them, and a special royal language had to be used in their presence. All royal protocol, with its elaborate ceremonies and rituals was supervised by a caste of Brahmins. This concept is known as Dhevaraja (เทวราชา). The other source from which ideas of kingship was inherited was Theravada Buddhism. Buddhism urged that the king must govern in accordance with Dhamma, the teachings of the Buddha. This concept is known as Dhammaraja (ธรรมราชา). Over time, these two concepts have occasionally been at odds with each other.

The first King of all Thailand was King Sri Indraditva, who founded the Sukhothai Kingdom in 1238. The Kingdom of Sukhothai was eventually supplanted by the Kingdom of Ayutthaya, which was founded in 1351 by King Ramathibodhi. Under the Ayutthaya kings the Hindu or Vedic concept of royal rule became much stronger. This continued until Ayutthaya was sacked and burnt to the ground by invading Burmese forces in 1767. After a brief interlude a new kingdom was established by King Buddha Yodfa Chulaloke (Rama I) at a new capital downstream from Ayutthaya, which he named Krungthep Mahanakorn, better known to the wider world as Bangkok. The dynasty he founded continues today.

Attempts were made to modernize the Thai monarchy by the great reforming monarch, King Chulalongkorn. He banned the practice of crawling before the monarch, and allowed ordinary people the right to touch the king. He and his successors sent bureaucrats and military leaders to the West for training and education, and Western ideas of democracy and equality began to attract more support. This eventually culminated in the coup of 1932, in which King Prajadhipok was forced to end absolute rule and grant the people a constitution. This is celebrated every year on December 10, as [Constitution Day](/thai-holidays-festivals/constitution-day/). In 1935 the king abdicated the throne, following disagreements with the government’s increasingly authoritarian style, and went into exile in England. He was replaced by his 10-year-old nephew Ananda Mahidol, who was being educated in Switzerland. The new king stayed in Switzerland, being represented in Thailand by a board of regents, a group which quickly came under the controlling influence of General Phibun’s fascist government. This in turn came under the control of the occupying Japanese forces. After the war King Ananda Mahidol returned to Thailand, where he died in an accident in 1946. His younger brother, Prince Bhumipol Adulyadej then became King of Thailand at the tender age of nineteen.

[Bhumipol Adulyadej](http://en.wikipedia.org/wiki/Bhumibol_Adulyadej) (pronounced: Boomipon Adun Yadet) was born December 5, 1928 in Cambridge, Massachesetts, where his father was studying Public Health at Harvard. He returned to Bangkok briefly, but in 1933 his mother took him and his younger brother to Switzerland where they stayed until the end of the Second World War. Bhumipol ascended the throne, following the death of his brother, on June 9, 1946. This makes King Bhumipol the world’s longest reigning current monarch. He returned to Switzerland to complete his studies, leaving an uncle to act as regent in his absence. It was in Switzerland that he met and married his wife Queen Sirikit. Following this he returned to Thailand where the official coronation ceremony took place on May 5, 1950. He is thus the world’s longest serving head of state. This date is celebrated every year in Thailand as [Coronation Day](/thai-holidays-festivals/coronation-day/), a public holiday.

King Bhumipol has tried to move a once marginalized monarchy onto center stage, partly by reviving public royal ceremonies like the Royal Barge Procession, and the Royal Ploughing Ceremony, but also through the pursuit of royal projects aimed at the development of Thailand and the improvement of people’s living standards. He is particularly associated with rural development projects such as the crop substitution program ordered to wean hill tribe people from the cultivation of opium poppies. Flowers and temperate zone vegetables from these projects are available for sale all over Thailand, but particularly in Chiang Mai. He also set up the [Chaipattana Foundation](http://www.chaipat.or.th) to promote a _self–sufficiency_ economy for Thailand.

Compared to other constitutional monarchs, the King of Thailand enjoys additional reserve powers and can veto legislation by refusing to sign it into law. He also enjoys huge influence, partly through the system of patronage that characterizes Thailand’s political system, but mainly through his enormous popularity and personal prestige. On occasion he has used this power to influence events, for example during the coup of 1992, when the main protagonists were summoned to the palace for a televised lecture on the need for national unity.

Another divergence from some but by no means all constitutional monarchies is that any criticism of the Thai King is absolutely forbidden and can attract harsh penalties through the prohibition against [lèse majesté](http://en.wikipedia.org/wiki/L%C3%A8se_majest%C3%A9). The king himself is unable to defend himself, and there are no laws which provide him an opportunity to contradict any defamatory statements.

Foreigners in particular should avoid any criticism of the throne. For those foreigners who are in the habit of loudly criticizing their own monarchs, this will not go over well in Thailand. Thailand has a more respectful and face-based culture and direct criticism and negativity is seen as poor manners or worse.

One of the first things foreigners notice about Thailand is the way in which all people stand for the national or royal anthems when they are played in public places like markets or bus stations. The national anthem is played twice a day in public places, at 8 am and 6 pm, and all are expected to stand. The royal anthem is played before cinema and theatre performances, and the same behavior is expected. Any likeness of the King, for example on coins and banknotes, also needs to be shown appropriate respect.

Many of the Royal places are open to public view at certain times of the year. Obviously, the Grand Palace in Bangkok is a major tourist draw, as is the teak palace of Vinanmek, also in Bangkok. Other palaces, such as the Klai Kangwon Palace in Hua Hin, where the King now spends most of his time, is effectively off limits.

In Chiang Mai, the royal family has a palace near the top of Doi Suthep, known as [Bhubing Palace](http://www.chiangmaitouristguide.com/07-2008/feature3.html). This palace, with its extensive rose gardens, is open to the public when the royal family is not in residence. Call 053 223 065 before you go. 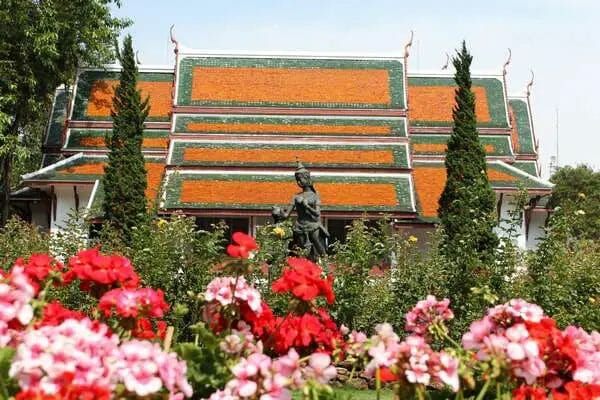 > People of the whole nation join the national celebrations on the auspicious occasion of the birthday anniversary of His Majesty King Bhumibol Adulyadej, 5 December.

> The day is also observed as Thailand’s National Day and National Father’s Day. Thai people celebrate this auspicious occasion on a grand scale to show gratitude to their beloved King, who is “more than a monarch.”

> Each year on His Majesty’s birthday, festivities are held throughout the Kingdom; lights decorate households, government offices, public places, and private companies everywhere. The love, respect, homage, and joy pouring forth from Thai people to honor His Majesty are wonderful to see. One of the activities as a tribute to His Majesty on his birthday is a candle-lit, tribute-paying ceremony, which takes place across the country.

> His Majesty the King once said that his happiness would come about when the country has prosperity, stability, and normalcy. He pointed out that the country would return to normalcy, and prosperity and stability would be achieved when people of all groups perform their duties with mindfulness, wisdom, honesty, and sincerity, while focusing on the public interest for the sake of the country as a whole.

> From the day His Majesty the King ascended the throne as King Rama IX, on 9 June 1946, to the present day, the words have not been found that can describe his immense kindness and compassion toward his subjects. His Majesty has ceaselessly devoted himself to the improvement of the livelihood of the people. He is regarded as the symbol of unity and social harmony in Thai society.

> His Majesty has righteously exercised his role under the democratic system and has also strictly abided by the Constitution. He does not appear to desire a political role for himself, but in times of crisis, people have always turned to him. Over the years of his reign, the political ups and downs of democracy have shown him to be a stabilizing force that the nation can look up to and rely on.

> It is clear that His Majesty has his watchful eyes on all happenings in the country, because Thai people are foremost in his mind. He also reckons that the people of Thailand have always looked up to their King in times of trouble. All the remarks, addresses, and speeches delivered by His Majesty reach his target audiences, and make up textbooks to be studied in various aspects at all levels, not just because of their rhetorical perfection, but as indications of his visions and activities, carefully thought out and put into practice by His Majesty himself as an example set for the people.

> With his wide-ranging talents, he has been presented with many titles, such as the Teacher of the Land, the Father of Development Work, the Father of Thai Crafts Standards, the Father of Royal Rainmaking, and the Supreme Artist.

> His Majesty the King commands great love and respect among his subjects. His birthday is regarded as a very significant day in Thailand.