Inthakin also known as Sai Khan Dok – บูชาเสาอินทขีล worship of the city pillar – ประเพณี tradition of ใส่ขันดอก flower offering to the อินทขิล pillar – is a festival held every year in Chiang Mai, Thailand. It is a uniquely [Chiang Mai Festival](http://en.wikipedia.org/wiki/Chiang_Mai). The citizens of Chiang Mai are given the opportunity to venerate the guardian spirits of the city, particularly the spirits associated with the City Pillar, known as Sao Inthakin (The Lord Indra’s Pillar). This pillar had been used for an earlier city built in the same area and is associated with the Hindu god Lord Indra.

On Thursday, 14 May to Thursday, 21 May 2015, from 8am until 5pm people will offer flowers to the pillar spirit at Wat Chedi Luang. At 5pm, nine monks will pray. After 6pm, there is a special dancing for Inthakin and cultural performances, though these are not a core part of the Inthakin event itself. On the 1st from 9am until 1pm there will be 108 monks who will perform a closing ceremony. [Source in Thai language](http://www.reviewchiangmai.com/1646). 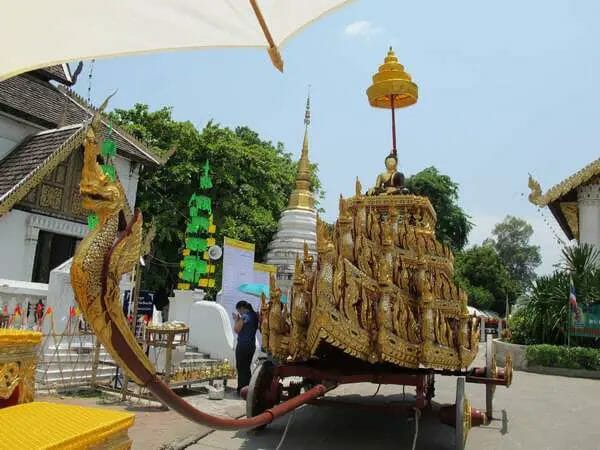 ## Founding of Chiang Mai in 1296 ##
This pillar was laid when Chiang Mai was founded by King Mengrai at the astrologically auspicious time of 4 am on the morning of April 12, 1296. Originally, the pillar was laid at Wat Sadeu Muang (Temple of the Navel of the City), near the Three Kings Monument. This temple is also known as Wat Inthakin. Later, the city fell on hard times, being occupied by Myanmar for nearly two hundred years. Many Chiang Mai people believe these calamities occurred because their ancestors failed to respect the city’s guardian spirits.

Consequently, when Prince Kawila was able to defeat Myanmar and renovate the city in 1800 he paid special attention to the needs of the guardian spirits. He moved the pillar from the decayed Wat Inthakin to the temple of Wat Chedi Luang, built a special pavilion for it, and planted three large trees near the pavilion. A local belief is that if the tree nearest the pavilion falls, then so does Chiang Mai.

## Eight Day Festival in Chiang Mai ##
The festival takes place over 8 days, starting from the twelfth day of the waning moon of the sixth lunar month. In 2013 this is June 5-12. In 2014 it will be May 26-June 3. Note that on the eighth day there is no offerings given, only some concluding ceremonies.

## Veneration of the Buddha Image ##
The festival begins with a procession around the old town of the city. A Buddha image called Phra Fon Saen Haa (the Five Hundred Thousand Raindrop Buddha) is carried, blessed with lustral water and placed in the courtyard of the temple. After this the devotees are allowed to venerate the Buddha and the City Pillar, and to place flowers, candles and incense in each of twenty-eight bowls laid out on mats in the temple.

This ceremony is known as [Tham Boon Khan Dok](http://en.wikipedia.org/wiki/Tam_Boon_Khan_Dok) or Flower Bowl Blessing. The best time to see this is at night. The temple is dramatically lit up and the streets around the temple are filled with vendors selling not only flowers, candles and incense to the worshippers, but also lots of food and drink. There are also cultural performances and dance displays.

## Propitiation of Guardian Spirits ##
Finally, at the end of the celebration, another procession goes around the city moat. This ceremony, known as Tham Boon Muang (City Blessing) is designed to propitiate the guardian spirits of the moat and city gates, and to ensure the city’s prosperity for another year.

While this is clearly a Chiang Mai festival for Thai people, it is a colorful and friendly event open to everyone. It is possible to participate in the ceremonies as long as the standards of propriety are followed, which means appropriate clothing and behavior on the temple grounds. There are plenty of friendly people who participate and are happy to help. 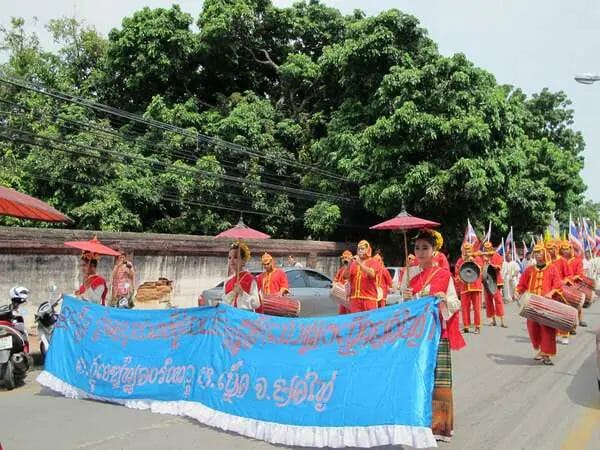 ## Invoke Blessings of Peace and Prosperity ##

The Inthakin Festival is held annually to invoke blessings of peace, happiness and prosperity for the city and its residents in Chiang Mai, Thailand. It is held at Wat Chedi Luang, one of the original temples of the old Chiang Mai, for 7 auspicious days and nights, in the seventh lunar month of the Lanna calendar. According the the old lunar calandar followed by the northern people in the former Lanna kingdom, the week of Inthakin Festival valls on the twelfth night of the period of the waning moon of the eighth month and continues until the fourth day of the waxing moon of the ninth month. The week-long ceremony takes place in 2012 from May 17-24.

The main activities are in the afternoon of the first day, when an important Buddha image named _Fon Saan Haa_ (literally one hundred thousand drops of rain) is taken from Wat Chedi Luang and paraded around Chiang Mai city, while local people sprinkle it with lustral water. The belief behind this is that those who take part in the ceremony will be blessed with good health and that rain will fall in the right at the right time of the season. The parade ends at Wat Chedi Luang where the seven days of Inthakin is held.

The crux of the Inthakin Festival revolves around a ceremony called _Tam Boon Khan Dok_ – the way of merit-making by offering flowers, candle, and joss sticks in the bowls in teh front of the temple. Each evening, monks chant prayers and sprinkle lustral water, and bestow blessings on flok performances, such as the playing of the _Saw_, a Thai classical instrument, and the dancing of the Lance Dance, the Sword Dance, and the Muang Dance.

In the evenings of this seven day festival, a large carnival takes place on the grounds of the temple. An enormous number of local people visit the temple to pay respects and make merit, and also to socialize and enjoy local food as well as games and a small ferris wheel (for children). It is worthwhile going just to see the place, which at night with all the lights and people, and the large Chedi, is quite atmospheric.

The current city pillar was constructed in June 1893 Buddhist Era (1350 CE) in the reign of King Mengrai, who was the first king of the Lanna Kingdom. Traditionally, the pillar was sited at the geographic center fo the city in Wat Sadue Muang (Temple of the Navel), near the Three Kings Monument. However, as the temple fell into disrepair over 100 years ago (and was only recently rebuilt), the Inthakin Pillar was transferred to Wat Chedi Luang in the reign of King Kawilla.

Chiang Main’s Inthakin Pillar is now housed in its only special shrine called Vuiharn Jaturamook. It is noted that the pillar cannot be seen at any other time of year. Men may enter the shrine to see and pray while women are not permitted to enter the shrine, but may view through the entrance portals.

It should also be noted that females should also take care not to climb on top of the four corners of the moat structure, as the same taboos are in place at those locations. Local people can become distraught if this taboo is violated. 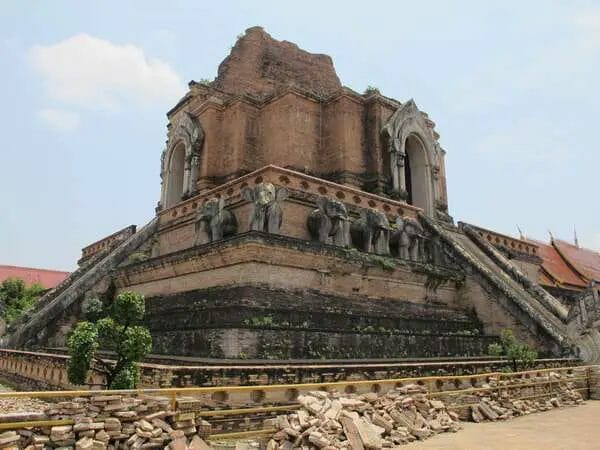 The area which is the center of Lanna Kingdom was the residence of the Lua (One of Lanna ethnic group). It was a haunted city by bad spirits, causing troubles and hardship to its people. The god [Indra](http://en.wikipedia.org/wiki/Indra) (Pra In in Thai, King of gods or devas) then came to help them by bestowing 3 magic wells in the center of the city:

Indra ordered nine clans to take care of the magic wells, 3 clans each and named the city Nopaburi after the 9 clans (Nop or นพ means nine). The Luas can come to these wells take the gold, silver and crystals and sell them to make a living or make their wishes and all will be granted-—but all these must fall under the condition that the Luas must hold the precepts and good virtues. Henceforth, the people follow this command and became happy and enjoyed their prosperity.

The news about the fortune in city spread to other cities and they wanted the share of the Lua’s wealth by sending troops to attack the Nopaburi city. The Lua became frightened and asked a Rishi (holy man) to go to report to the god Indra.

The god then ordered two giants to remove the sacred Lord Indra’s Inthakin (Intha = Indra, kin = pillar) pillar from heaven and drove it into the earth at the center of Nopaburi city. The enemy troops came in and by the power of the Inthakin, turned them into merchants.

These merchants came to ask the Lua people for some share of wealth. The Luas then told the merchants to follow the god Indra commands that they would hold fast to the virtues of honesty and shall not be greedy. Some of the merchants followed this path, others did not. This stirred up anger in the guardian giants so the giants removed the Inthakin pillar back to heaven.

The removal cause the magic power of the wells to fade. People began to suffer. At that time, a revered Lanna monk had made a prediction that in a few years from then the city would be devastated. The Luas became fearful for their future then asked the monk to help.

The monk brought the matter to the god Indra. Indra advised the Luas to make a big metal wok and then in it put figurines of all animals in pairs, men and women of all languages, and bury them under the ground and put the replica of heaven’s Inthakin on top. People shall come to worship this and live a virtuous life then the city will enjoy peace and prosperity again. The monk told this to the Luas and the people followed this tradition and the city has never again experienced a catastrophe up until today. 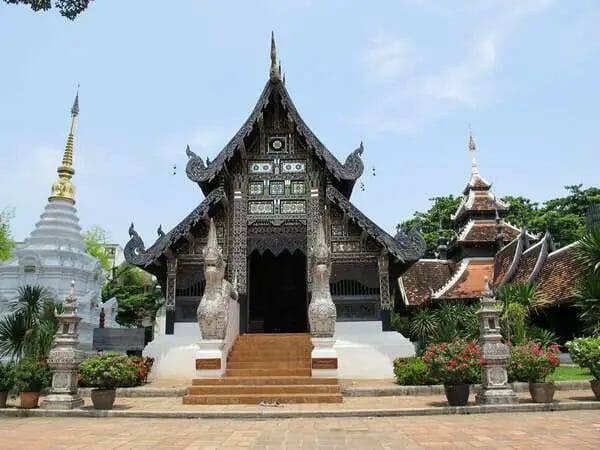