Chiang Mai in northern Thailand is the country’s second largest city and a popular place not only for tourists, but especially for expats, digital nomads & retirees. The city pulls many people with a perfect blend of low living costs, quality and ease for living as well as its fascinating and diverse culture. No wonder that many people stay actually longer than they initially intended to.

Despite being the second largest city in the ‘Country of Smiles’, Chiang Mai is about 40 times smaller than the bustling capital of Bangkok.

Although more laid back than the Big Mango (yes, another name of Bangkok), the increasing traffic lacks of proper supervision by the police and cannot be considered as an easy-to-overcome obstacle, but as real danger for foreigners who are less experienced in driving. Unfortunately many people get easily tempted to rent a scooter for as low as 100-150 THB per day, even if they do not possess a valid driving licence. 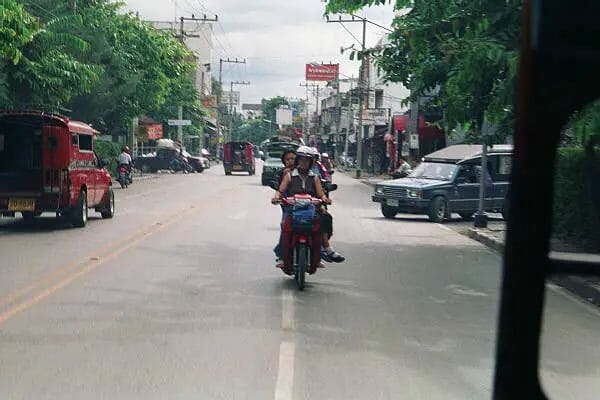 Let’s take a closer look on how you can safely manage to get around town:

Most of Chiang Mai’s roads are one way, which can be a blessing and a curse at the same time. If you should plan any trips on weekdays between 16:00-18:00 it’s more recommendable to opt for a red Songthew (taxi busses), which conveniently drops you wherever you like. The main roads around the moat, to the other side of the Ping River as well as towards Hang Dong and Mae Rim are terribly jammed due to rush hour. Two other places to avoid are Chiang Mai Gate on Saturday night due to the night market and the area around Thapae Gate on Sunday afternoon/night, due to the market which takes place there.

Main roads in Chiang Mai are wide and two lanes per direction are common. It’s imperative that you drive always on the left side to keep space for cars, busses and trucks, unless you’re in a hurry and need to drive really fast. Some roads have a designated lane for motorbikes only, making it more convenient but especially safe for you. Another important thing to highlight: make sure to overtake any other vehicle always from the right side and never from the left.

Think it’s going to be way easier by following a public bus (Songthews)? Think again! Whether you follow a bus or taxi (usually yellow/blue coloured) in hope to get easier and/or faster to your destination or just unintentionally, make sure to keep a proper distance as these drivers are unpredictable when it comes to stopping or sudden turns, often even without using the flashing indicator. The main public transports in Chiang Mai are so called Songthews, pick-up trucks converted to busses in different colours. The most recognizable is the red Songthew which functions as a taxi bus, speaking the driver may suddenly stop at any time to either drop a passenger or to pick one.

Now while this seems obvious, it’s better to pay 110% attention. First and foremost – as you probably do it at home – do not listen to music or talk on the phone while driving. Make sure to always keep an eye on what’s coming from behind. You need to have a good sense of reacting fast – cars might suddenly try to take over and think they can fit into the 3m space between you and the other vehicle in front of you. In addition to using the flasher, raise your hand to indicate which direction you want to take. Pay extra attention when you drive along smaller roads; it’s not rare that kids might cross the road all of a sudden just to run behind a ball or that dogs sleeping on the road.

Too often people get tempted by obvious softer traffic regulations than they have at home. Reality check: as foreigner driving in Thailand, you’re a perfect opportunity for cops to make cold cash:

In summary, do think of you own safety first. Ask yourself whether you’re experienced enough or want to jeopardize your health. You would not be only a danger for yourself but also for others. In addition, if you should be involved in an accident without (valid) driving license, your insurance company won’t reimburse any medical costs.