Many Thai people can trace some part of their ancestry back to China. As many as 14% of the population refer to themselves as Thai-Chinese, even though, as a group, they have been largely assimilated into the Thai culture, with the exception of spoken Chinese at home as well as holding to many Chinese traditions. [Chinese New Year](https://en.wikipedia.org/wiki/Chinese_New_Year) is one of the more important of these.

2018 is the year of the dog, and is officially on Friday, February 16th, though celebrations can last several days or weeks if considered comprehensively. Unlike some neighboring countries, such as Malaysia, Singapore and Vietnam, Chinese New Year is not a public holiday in Thailand and all government offices and banks will be open. A few Chinese-owned businesses may close, but most will not.

##Chinese New Year Celebrations##
This festival is celebrated with great pomp and show all over Thailand. Red is the most auspicious color for Chinese people and it will be seen everywhere. Colorful dragon dances and processions, enlivened by the noise of firecrackers, will provide good photo opportunities. The [Chinese New Year celebrations](http://www.holidayshub.com/chinese-new-year/celebration-thailand.html) will take place over several days. Thai-Chinese will begin their celebrations with a communal family meal on the eve of Chinese New Year as a way of joining the spirits of the past with the present day family. At midnight the doors and windows must be thrown open to let out the old year. The living rooms of Thai-Chinese people will be decorated with vases of flowers, plates of oranges and tangerines, and a tray of eight varieties of dried sweet fruit will be offered to visitors and well-wishers. Children and unmarried people will also be offered little red envelopes with money inside, called Ang Pao or Lai See, to ensure good fortune in the coming year.

##Chinese New Year in Chiang Mai##
In Chiang Mai, the focus of the celebrations will be the Chinese temple at the Warorot (Kad Luang) market, by the Ping River. This year there will be fire dragon shows, lion dances and exhibitions of kung fu fighting from Guangxi Province in China. There is also a photographic and art exhibition tracing the history of the Chinese community and the Warorot market. This will take place at Trok Lao Cho, one of the old wooden shophouses at the bottom of Tha Pae Road, adjacent to the market. Still, the celebration is more sedate than seen in other foreign countries, and only recently is perceived as an opportunity for tourists and local non-Chinese Thai people to participate in some way. 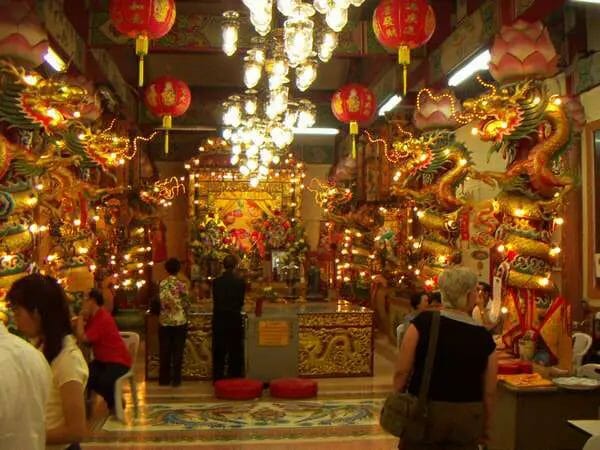