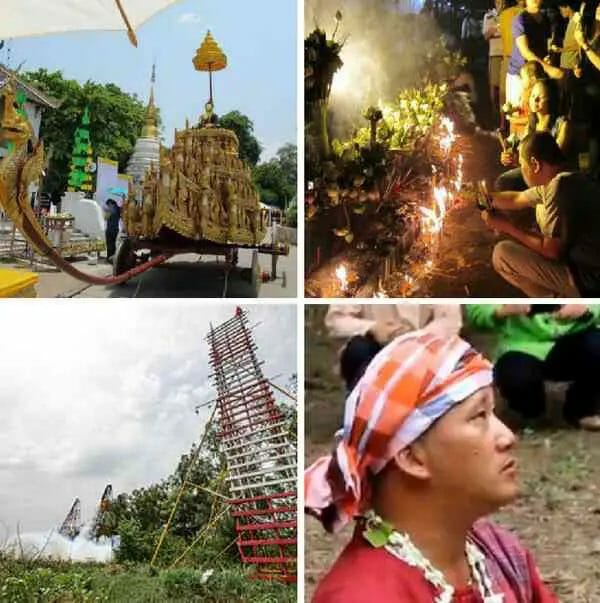 Like in many countries around the world, the first of May is celebrated as day of labour and a public holiday. The day is not of big significance and most of the shops and stores remain open. A few institutions like from the government and banks however work reduced hours or take entirely off. Some places offer their employees extended days off between Labour Day and the Coronation Day.

The Coronation Day is a public holiday in Thailand to celebrate the coronation of His Majesty King Bhumibol Adulyadej which took place on 5th May 1950. He already came to throne four years earlier following the death of his brother but decided to finish his studies before being officially crowned. His Majesty is the ninth king of the Chakri Dynasty and holds the title King Rama IX. To date, he is the longest reigning living monarch. If the Coronation Day falls on a Sunday, the following Monday will be a substitution day holiday.

If time is not a deal for you then head over to the neighbouring state of Isaan, where Thailand’s noisiest celebration is held – the Bun Bang Fai Rocket Festival of Isaan. Isaan is a state located in the northeast of Thailand, close to the borders of Laos. The areas of Isaan consist widely of agricultural land and the festival marks traditionally the start of the rice-planting season. According to old beliefs in Isaan, the rockets are launched to bring rain. The rockets were made from bamboo and although still used in some cases, modern versions are made from plastic or PVC filled with gun powder.

The rockets are launched in a contest for the highest flying rocket while a lot of credit and respect is given to the winning team. During the course of the festivities you can see many parades through the streets, beauty pageants and music concerts. The festival is annually held on the second weekend in May.

The city pillar festival is definitely a very interesting celebration which you shouldn’t miss when visiting Chiang Mai at the same time. In Thailand, pillars were created whenever a new settlement happened, thus, this festival is celebrated in almost every city and town around Thailand, but depending on the date it was built.

Chiang Mai’s city pillar was first erected by the end of the 13th century with the founding of the city by King Mengrai. The initial place was at Wat Sadue Muang (also known as Wat Inthakin) on Intrawarorot Road, however it was moved to a small shrine on the premises of Wat Chedi Luang, next to the big Dipterocarp tree, in 1800 by King Kawila. Legend says, if the pillar falls a big catastrophe will follow. The celebration is held around Wat Chedi Luang and symbolizes the respect towards the pillar and the city and that its residents will stay safe and healthy. The dates depend on the lunar calendar but the festival is usually in May. The word ‘Inthakin’ is from the Lanna dialect and means ‘pillar’.

Although there are many important holidays throughout the year such as Loi Krathong or Songran, Visakha Bucha Day is the most important one. The day celebrates the three defining events in the life of Buddha: the birthday, the day of enlightenment and the day he passed away and entered the nirvana. The date varies from year to year as it depends on the lunar calendar but it’s usually in May or June. On this day, you can see many Thais visiting their local temples to make merit. It is also important to highlight that many entertainment spots like bars and clubs are closed on that day and very strict restrictions on alcohol sales and public alcohol consumption apply.

This festival is one of the lesser known festivals in Chiang Mai to commemorate two guardian spirits who live on Doi Suthep Mountain and turned from bad into good. According to the legend, the two spirits known as Pu Sae and Ya Sae were two giants living in the forest around Doi Suthep with a hunger for raw meat, especially human flesh. They were introduced to the teachings of Buddha and asked to protect the city. The ogres agreed and became repentant but still had a slight hunger for raw meat, so they agreed in turn for sacrificing a buffalo each year. The ceremony is not for the faint hearted as it involves trance-like rites and butchering a buffalo.