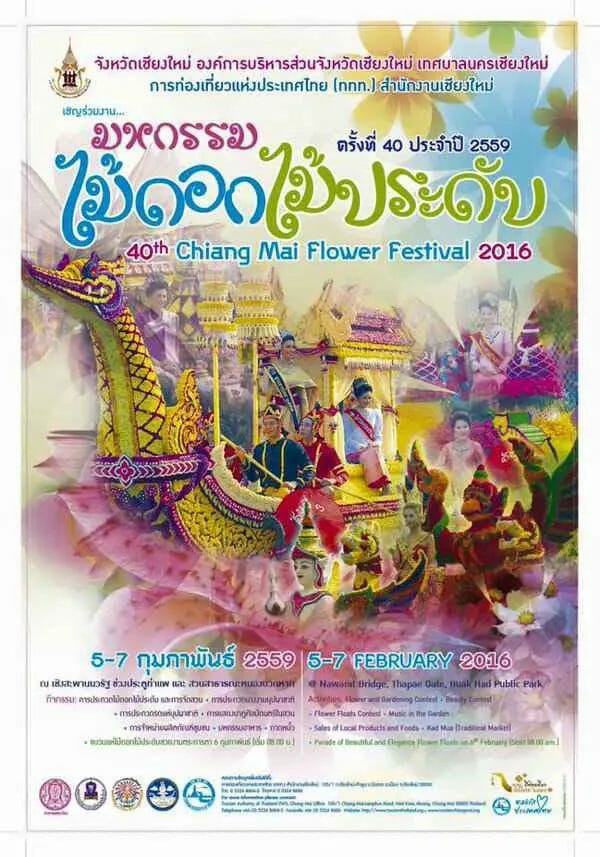 – For 2014, the Chiang Mai Flower festival is Friday-Sunday, 7 to 9 February 2014. For details will follow when they become available 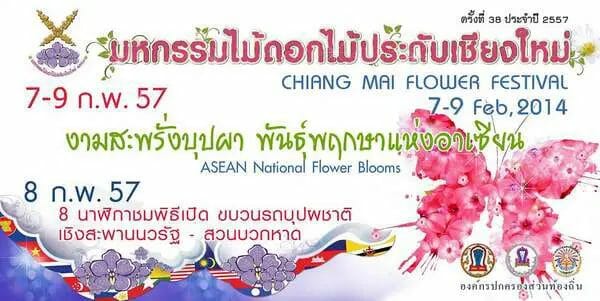 Map showing the parade route for Chiangmai Flower Festival. Here are the activities that will be going on:

* Walk along and enjoy a variety of activities throughout 1st-3rd February, 2013–agricultural exhibition and fair, the contest and exhibition of flower arrangement, decorative plants, and mini garden landscaping, local products fair, and music shows in the park from 09.00-24.00 Hrs. at Nong Buak Haad Public Park and Thapae Gate. 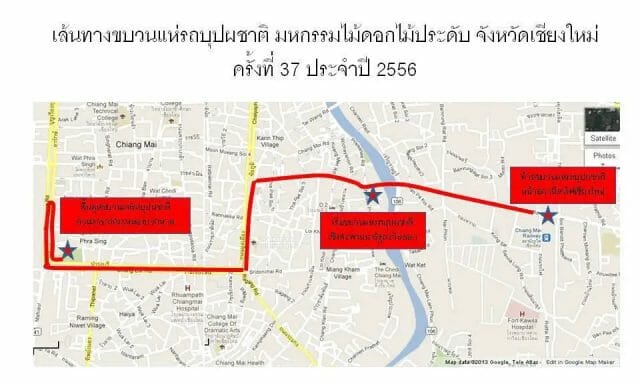 ## Chiang Mai, the Rose of the North

Chiang Mai, Thailand, is known as the _Rose of the North_, but it really blooms into life in early February, towards the end of the cool season. Every year on the first weekend of February, the [Chiang Mai Flower Festival exhibitions](http://wikitravel.org/en/Chiang_Mai#Festivals_.26_exhibitions) open. The flower beds in public gardens and other places are especially beautiful at this time of year. Everywhere the tourist will find displays of yellow and white chrysanthemums, and the Damask Rose, a variety found only in Chiang Mai. Also, the pink and purple Dendrobium orchids, and the lovely yellow Daoruang. The real focus of this Chiang Mai festival, however, is the public garden of Suan Buak Haad on the south-western corner of the moat. The police close off the road next to the moat all around the park, and allow vendors of plants, Thailand flowers, Thailand orchids and garden decorations to set up their stalls. This is probably the nicest corner of the moat, well supplied with shade trees, and a good place to spend an hour or two looking at what is on offer. 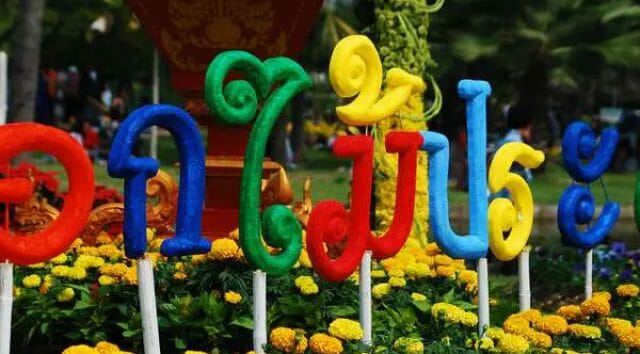 ## Suan Buak Haad City Park ##
From here it is possible to walk into Suan Buak Haad itself. This is a very pleasant space at any time, with formal gardens arranged around a series of pools and bridges. There is a children’s play area, and various places where refreshments are available. For the Flower Festival the park is completely transformed, with special displays of flowers, miniature trees and the famous local orchids, all set out for the judges to choose the best of each species. There are also displays by landscape specialists, featuring waterfalls, patios and various schemes of garden decoration. In addition there are stands representing gardens from neighboring countries, and stands selling local products..

## Flower Festival Parade ##
In some ways this is the best part of the Flower Festival. The [Flower Festival Parade](http://www.chiangmai-vacations.com/chiang-mai-blog/chiang-mai-events-festivals/chiang-mai-flower-festival-2009/41/) starts on Saturday morning. The parade lines up along Charoen Muang Road, all the way up from the Nawarat Bridge to the train station. At 8am the parade begins to move. After passing the viewing stand the parade moves up Tha Pae Road to Tha Pae Gate and then turns left and follows the moat round to Suan Buak Haad. The parade moves very slowly, and stops frequently, so there is plenty of opportunity to take photographs of the gaily decorated floats, pretty girls, and colorful hill tribe people in their costumes. At these stops dancers in traditional costumes perform Thai dances. Those taking part in the parade hand out roses to the spectators lining the road. 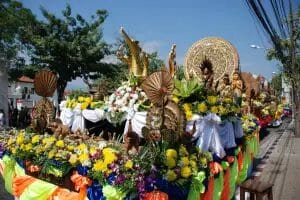 ## Other Chiang Mai Floral Attractions ##
Those coming to Chiang Mai for the Flower Festival can also combine this popular spectacle with a visit to other places of horticultural interest.

### Queen Sikrit Botanical Garden ###
Occupying 2,600 acres, [Queen Sikrit Botanical Garden](http://www.qsbg.org/index_E.asp) can be found up in the mountains on the Mae Sa road about 20 kilometers out of town. This garden was founded in 1992 to collect and conserve rare species of plants. It now has a glasshouse complex, a natural history museum, and a number of nature trails through the forest. The exhibits are arranged by both species and habitat. Travel around the garden is by car or by the transport provided, but motorcycles are not allowed.

### Orchid Gardens around Chiang Mai###
There are several [orchid gardens](http://www.chiangmai-chiangrai.com/orchids_from_chiangmai.html) lower down on the Mae Sa road, before the Queen Sikrit Botanical Garden. Most hotels can arrange trips to these gardens. There are more than 400 types of orchids naturally occurring near Chiang Mai and growers are constantly hybridizing new varieties. The growers can advise on exporting orchids from Thailand.

### Ratchapruek Royal Park, Chiang Mai ###
[Ratchaphruek Royal Park](http://www.travelpod.com/travel-blog-entries/thailand_dream/1/1277031975/tpod.html) is situated about 20 kilometers south west of Chiang Mai on the Canal Road. It was the site of a famous horticultural exposition called Royal Flora, held in 2007, and most of the exhibits are still in place. The next Royal Flora will be held between November 9, 2011 and February 5, 2012.

### Dokmai Gardens, Chiang Mai ###
[Dokmai Gardens](http://www.dokmaigarden.co.th/) is a private botanical garden owned by Eric Danell and his wife. They are a mine of information for those wishing to start their own tropical garden. There is a small restaurant on site. This garden is situated about 5 kilometers from Ratchaphruek Royal Park. Eric also hosts a [tropical gardening blog](http://dokmaidogma.wordpress.com/).

### Tweechol Botanic Garden, Chiang Mai ###
[Tweechol Botanic Garden](http://www.tweecholbotanicgarden.com/main_eng.php) is more than a garden as it has its own petting zoo, rice paddy fields, organic farm, a riding arena, camping facilities and a museum onsite. Some local people find that this is one of the best botanical gardens to visit. Tweeechol is on on the Doi Saket Road. You won’t be disappointed. 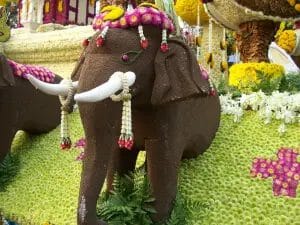